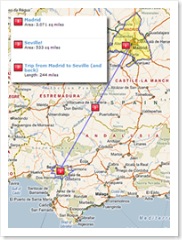 Sevilla (the anglocized version is Seville) sits about 250 miles southwest of Madrid.  Our trip there this weekend only took about 2.5 hours each way on the AVE high-speed train.  It was a short trip (weeft Friday morning and got back late Saturday night), but a lot of fun; Sevilla is a great little* city.

Oppressive Heat – We got into Seville about noon and went directly to check into the Hotel Don Paco.  My coworkers at Elipse had promised me that it would be schorching in Sevilla and they were absolutely right.  Over a span of 10 minutes walking from the train station to the hotel and sticking to the shade of buildings, I managed to get a slightly sunburned neck.  After we checked in (and after I liberally applied sunscreen), we walked towards the Catedral in central Sevilla.  On the way we witnessed the Arabian influences on the city in the methods they use to cope with the heat.  The old streets wind narrowly between five-story buildings allowing the city to dampen the searing sun by hanging sheets between buildings.  We definitely appreciated all of the sombra (shade) we could get as it was so hot.  The temperature was about 34 degrees C (93ish F) with burning sun and hot wind both Friday and Saturday.

A Mosque/Cathedral – Before we toured the Catedral, we stopped for lunch (it was early; only 1:30).  I had brought a tortilla espanola sandwich prepared by my host family which was delicious.  At 2:15 we met for our tour of the Catedral, the world’s largest Gothic cathedral (though it started life as a mosque).  Our tour guide spoke nice and slowly to facilitate our understanding.  One of the highlights of the cathedral is Christopher Colombus’s tomb.  The guide explained that another church (in the Dominican Republic, I believe) also claims to have Colombus’s remains.  The Seville Catedral had their remains tested in 2003 and proved that their Columbus was the real thing.  While the other church refuses to allow the remains to be exhumed, the guide said it’s entirely possible for them to have some of Columbus, too; when they opened his tomb in Sevilla, they found the box empty save for 51 grams of dust.  The other main attraction of the church is the Giralda bell tower, 320-foot tower that offers great views of the city.  It was originally built as a minaret for the mosque but was converted to a bell tower when entire building was reconstructed as a church.

Fit for a King – The next stop was the Alcázar, a fortified palace originally built by the Moors as a fort, then converted to a palace after the reconquista. It’s still used today by King Juan Carlos when he has official business near Sevilla.  The palace is beautiful.  It’s surrounded by huge gardens and is filled with breezy courtyards.  In the Sevilla photo album, there are lots of pictures so you can see a little of it for yourself.  The heat and plam trees kept reminding me of Florida.  After the tour it was almost 6:30, so we got some ice cream and went back to the hotel to rest for a bit.

Southern Spain= Southeastern US? – We left the hotel for dinner at 10:15ish with a grandious plan to walk down to the river and find a nice place to eat.  Unfortunately, we lacked a good map.  Despite the hotel’s directions we couldn’t seem to find the right street.  So we warily decided to ask someone.  We were wary to ask for directions not because of language problems but because Spaniards have a dangerous tendency to make things up.  If you ask someone for directions and they hesitate before the tell you, odds are they just made it up. It’s best to ask a couple of people and hope for the best.  You’ll never hear "I don’t know."  People also walk really fast and aren’t that much into pleasantries (on the street).  That’s the situation in Madrid at least.  The couple we asked in Sevilla actually greeted us with a "Hola" before we even approached them.  They walked slowly, were kind and talked slowly.  Remind you of anywhere? (Hint: they eat lots of fried food, too).  Anyway, after they heard where we were headed, they stopped and spent a good 3 minutes detailling exactly how to get to the river.  We would have gotten there, too, if it weren’t for an unfortunate wrong turn a block from the water about 30 minutes later.  A couple of minutes later we were back at the Catedral.  Oops.  As it was already 11:00, we decided to just eat at a cafe we happened by which turn out to be really good (I had another tortilla epanola, this time sans bread).

Before sleeping, we obviously had to digest dinner and explore some of the city’s legendary night life.  We ended up at a disappointing club that cost 10 euros.  By the time we got back to the hotel at 3:30, I had no idea how we’d be up for the next day.

A Sluggish Start – Breakfast was served from 9:00 to 10:00.  Needless to say I went down and grabbed some food at 9:57.  We left for an art museum at 11:00 and saw a lot of artwork the Spanish government took from monasteries as part of a plan to reduce the Catohlic church’s holdings in Spain in the late 1700s.  The building itself is in the same Sevillana style as the Alcázar with courtyards and bright colors and makes for a nice place to look at art.

The River (finally) – Next it was finally to the river where we saw the Torre de Oro, an old watchtower part of a larger system to safeguard the Sevilla harbor.  Nice views from the top of it, too (though there were stairs this time).  After a leisurely lunch across the river, we explored the city’s gardens (where there was a military exhibition going on; the lady who sold me lemonade assured me that there was no war, though :-) ).  We then wandered by Sevilla’s Plaza de Espana, home of the world’s fair in 1992 (EXPO ’92).  Another magnificent building.

Our train left for Madrid at 7:30 and when we got back, it was striaght to dinner then to bed.  What a busy two days (and the weekend wasn’t even over yet…).

*They try to trick you into thinking it’s little in the tourist-y areas.  Don’t be fooled, Sevilla is actually the 4th largest city in Spain with a population of more than 1 million.