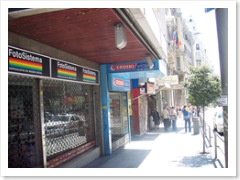 On Sunday we had the second of the two city tours.  This one covered El Parque de Buen Retiro, a huge public park about 10 minutes from where I’m staying.  On the way I was witness to the mass closures of Spanish buisnesses on Sundays.  With the exception of the first Sunday of the month, almost everything is closed (don’t worry, the Corte de Ingles is still open). 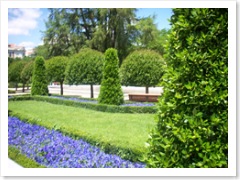 huge (350 acres) and includes gradens, a lake, books, and puppet shows.  We also covered the Paseo del Prado (a long park leading to the Prado art museum and the Botanical gardens) on the tour.  Also of note, the rain had finally stopped and the high temperatures returned.

After the tour I went home for lunch.  We had homemade paella.  During and after lunch we watched the Formula 1 race in Monaco and saw Fernando Alonso win the race.  Having watched the race, I felt very informed the next day while reading the newspaper on the way to work about the questions involving his victory (the questions have since been resolved). 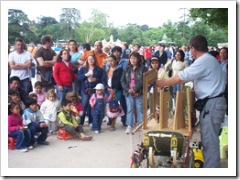 I returned to Retiro Park after lunch to meet some friends and walk around.  After being greeted by some creepy unlicesned Disney/Warner characters (see photo album), we stopped to see a  marionette show which turned out to be funny (though, sadly, included vocabulary that we didn’t understand but which really entertained the 5 year olds watching).  The next stop was the botanical gardesn which were really un-exciting.  Before heading back for dinner, we stopped for a snack at a little cafe near the gardens.  The service included our waitress taking a 15 minute break to smoke and drink at the bar with some friends.  On the way back to our side of town, we stopped for churros (yes, I had lunch, a snack, dessert, and then dinner).  Dinner was a delicious tortilla espanola (a sort of omlette made with egg and little pieces of potato) with flan for dessert (mmmmm :-) ).  A sweet end to a busy weekend.