I decided to split the rest of the weekend into mini-stories to make it easier to post and to read.  The first thing I did on Saturday after lunch was meet some people at the Estadio Santiago Bernabeu to find out about Real Madrid tickets.  Real Madrid is one of the top futbol (soccer) teams in the league.  Madrilenos go crazy for futbol.  When we got to the stadium around 2:00 pm, the air was already filled with claning and honking in anticipation of the game at 8:00 pm.  The statium is 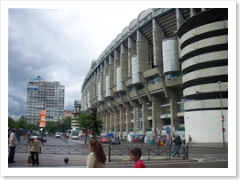 Anyway, we went got to the box office and found out that while there were still tickets left for Saturday’s game, they were either 40 euros or 70 euros (depending on which window you asked, appearantly).  The game also conflicted with a tour of the city given by the program that was to be at 7:00 that night (on which we could meet the Language and Liberal Arts Program kids who arrived on Friday), so we decided to put it off until next week.

Ultimately, we found out that due to a trip to Sevilla next Friday and Satuday, we’ll get back too late on the 2nd to make the game.  With the season ending, I’m not sure if we’ll make it to a futbol game after all.  There’s one other team in town (Atletico Madrid), so we might try there.