After the brush with celebrity I finally headed to dinner (albeit a little late).  The tardiness, of course, turned out to be no problem, because despite arriving at close to 9:30, only five people out of 16 had arrived to the 9:00 dinner.  Spaniards, it turns out, are not very concerned with being on time (one huge exception is in items of business, to which they insist on being exactly on time – not early or late).  The operate much on a schedule slightly more extreme than Jewish Standard Time.  A 10:00 social engagement may begin anywhere from 10:15 to almost 11:00.

Anyway, by 10:00 most everyone had arrived and we settled on a restaurant in La Plaza Mayor.  We got a large table out in the plaza to enjoy the cool (read: chilly)night air. To start off, the waiter brought 4 pitchers of sangria (16 euros each).  I had a sip, but don’t really like the taste; I stuck with my agua de grifo (tap water).  For dinner I got a ham bocadillo (sandwich) which arrived plainer than I would have liked.  Anyway, the food and conversation were both good and we finished up around 11:30 (proud Aunt Yvonne? ;-) ).

Most of the group was planning to go bar-hopping; I wanted to go see a midnight showing of Piratas del Caribe which had just opened.  Luckily, I found some others from the program who were willing to come along (thanks Tanya and Stephanie!).  The movie was inexpensive (6.50 euros, or comparable to a movie in the US) and included ads and previews just like in the US.  The movie was dubbed in Spanish, though usually the lips lined up very well.  I understood the main story line and even "got" some of the jokes.  I plan to watch the movie again in English (maybe with Spanish subtitles) after it comes out on DVD to see how many jokes/subplots I missed.

The movie got out around 2:45 am.  Before I continue, here’s a primer on the city’s public transit system: the Metro has 11 lines that blanket the city in addition to countless bus lines.  It’s very clean and the trains always come promptly (the buses sometimes come promptly).  It’s also inexpensive; I applied for an unlimited-use monthly subway and bus pass for only 20 euro (it’s less expensive for "joven" or those under 21, normally it’d be 40 euro).  The one drawback is its hours: the Metro closes at 1:30 am and reopens at 6:00 am.  During the gap, the city operates the BUWO night bus service, which, while limited in frequency and coverage, approximates the regular Metro service with fewer stops.  Generally, if the Metro gets you within 2 blocks, the BUWO would get you within 5 blocks of your destination. 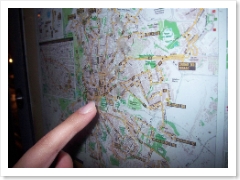 Therefore, when we left the movie the only operating public transit  service was the BUWO.  We called some fellow program participants who went the bar route to see what they were up to and discovered that they might need a little help getting home.  After much consternation we had everyone on the proper bus or taxi (which are extremely difficult to catch on the weekends) and I could head back home myself.

I live in an area called Chueca which is close to Gran Via, La Plaza del Sol, and lots of nightlife. As such, walking back from the bus stop where everyone went their sepatate ways, I was within a 5 minute walk of my family’s home.  As my guidebook says, NYC may be the city that never sleeps but Madrid never blinks.  True to life, the streets were full of people, even more so than in the day.  On my brief walk home, I even saw one of the city’s employees cleaning a sidewalk. With so much light and life, I felt very safe.  That said, it is a big city so the there are a couple of general givens: 1) no visible valuables, 2) stick to lighted, busy streets, 3) pay attention to surroundings, and 4) keep wallet in front pocket.  These safeguards, coupled with the city’s visible police force (there were multiple officers walking on my street) and brisk walking I got back around 4:00 without incident.  After a long birthday, I was ready to sleep.