Since Friday was my birthday, I figured I’d offer a recap of the days events.  Here’s the first half (it was a long day)… 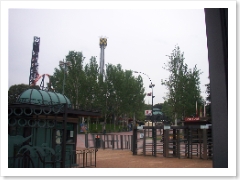 In the morning was the Diver Juve Race organized by my company.  It took place in a park called Casa de Campo to the west of the city.  Inside the park is the Parque de Atraciones de Madrid (it’s like a little Six Flags).  The race started (from the salida, I learned) at 11:00 and by 11:30, kids were arriving at the meta (another new word) where they got tickets to ride three rides in the park and some donated Coke products that aren’t selling well (anyone for Fanta World Shokata Maldivas Sabor Cítrico y Elderflower? It’s citric & Elderflower flavored).

All morning I helped watch over the organizers’ pile of stuff, which turned out to be the hub of activity so I was able to talk to lots of different people. 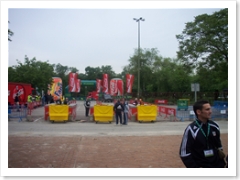 After the kids had their 3 rides, there was a prize ceremony in the park’s auditorium and each and every kid got a prize based on their bib number.  I helped grab prizes to hand to the people who were checking bib numbers.  The rain held off until prize distribution, so while the kids got a little wet at the end, overall it was pretty good weather-wise.

After that I returned home for some delicious stew.  It turned out to be wild pig, but it looked much like fat-free beef.  It was very tender flavorful despite having no fat. 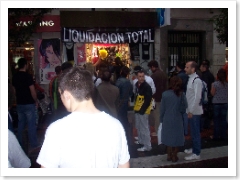 As I was headed out the door to dinner a couple of hours later (after having spent some time on Facebook at the Instituto), my senora came running in from outside and said that everyone should go outside, as there was a famous American shopping at the store next-door.  As the crowd grew, people started to speculate as to who  the star was.  Somehow it got around that Beyonce (who had a concert Friday in Madrid and one Saturday in Barcelona) was shopping in a shoe store.

After about 15 minutes, two heavy-duty vans pulled up and the security people started moving to exit.  By now the throng of Spainiards had spilled across the street (blocking traffic) and even included people on balconies of surrounding buildings.  Then Beyonce came out. 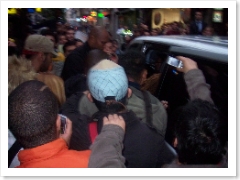 I then headed to dinner…  but I’ll leave the rest of the events to my next post.